Earlier this year the Government introduced law to Parliament that could see changes to the Goods & Services Tax on low value imports by consumers.

The move was a result of pressure being applied by local retailers who are not able to avoid the impost where their turnover is over $75,000 for the year meaning that consumers are charged the 10% which is collected and then sent to the ATO in the retailers' Business Activity Statement. Consumers in Australia have been able to avoid the GST by buying low value goods usually online from overseas.

Nothing in the law will change for goods that are imported and have a value above $1,000.

So what are the main reforms?

1: Low Value Goods Imported will Now "Be Connected With Australia"

These proposed changes makes these low value supplies connected with Australia if the goods are purchased by consumers and brought into Australia with the assistance of the supplier.

EDP providers such as Amazon that are used by consumers to order goods over the internet will be deemed to be the supplier whether they own the goods or not. This means they will be responsible for collecting and remitting GST. 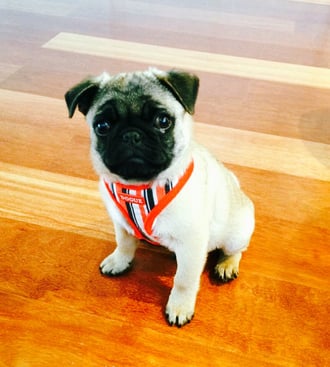 Sorry Baz - those dog treats from overseas may have to go! Photo courtesy of Balmain Baz and Lara Scolari Gallery Balmain

When you are a non-resident, doing business in Australia and getting registered for an ABN and Goods & Services Tax can be a complete nightmare and it can take a number of days and months to obtain. Small business accountants find there are many identification requirements and the process is cumbersome. To get around this issue the ATO will allow a simplified process from 24 June 2017 where registration on line is relatively painless and the supplier will be able to pay the ATO the GST over the net using SWIFT codes etc. The downside to this though is that the non-resident will not be able to claim any input tax credits using this simplified system with its business enterprise. If it wishes to claim any input tax credits then it will need to go through the full registration process.

The government has moved to try and provide a level playing field between local business and overseas providers when it comes to GST and low value items under $1,000. It could mean that the consumer will now pay more than they would have but at least it gives our Australian businesses a better chance to compete and keep the dollars in this country.

Surely this is a good thing?

Do You Know What Single Touch Payroll Is?
Big Tax Law Changes - No Deductions If Obligations Failed!
Are You Eligible For The R&D Tax Incentive? Chances Are "YES"!
Estate Planning and The 4 Asset Silos - Your Will Could Be Irrelevant!
5 Actions To Improve Your Business Valuation & Retire Early
Will Your Trust Be Caught By The Land Tax 2% Surcharge From 31 Dec 18?
10 Tips To Reduce Debtors and Improve Cash Flow
Taxation: Income Streaming Franking Credits From Trusts? Beware!
Do Franking Credits Increase Business Valuations?
Fill A Bucket Company & Get The 50% CGT Discount? = Major Tax $aving$!
How To Keep Company Carry Forward Tax Losses Intact - New Rules In.
5 Vital Components Of Any Cash Flow Forecast